Windows 10 I finally took advantage of Microsoft's free update to Windows 10 from Windows 7.  I've been running the OS for about a week and a half now and I'm largely happy with it.

Only have one real major failing with it at this point and that has to do with the chipset of my Netgear WNA1100 wireless N adapter.  Depending on how much I'm doing on the internet (connection wise), all my USB devices will just disconnect.  At first, I thought this was a recent Win10 development, but after thinking over the pattern of things, I realized the network disconnection has been going on for some time.  What is new is that the device completely disconnects now.  Previously I would just hit seemingly high pings for up to 30s and then be back to normal.  So I do think it was going on while I still had Win7.

All said, even after making sure I had the latest drivers, it seems the answer is don't use the Atheros chipset in my USB wireless or get an internal card.

Or do what I really want to do and just start using Ethernet over Power adapters.

I don't think most users will have many problems with Win 10.  Yes, stuff is arranged differently and I don't like how much usage information is being sent to Microsoft.  It lacks all of the touch interface items that made Win8 annoying.  Heck, I suspect it is only an iterative update from Win 7 overall under the hood.

My earworm for the day...

1 What's the source anime? (Probably in the Youtube page....)

End of Summer season thoughts Another post, hopefully a little more in depth.

Conclusion for those who want the short notes was that there were some series that brought me back into the anime fold again after being away for some years.  There were some big misses too. More after the jump.
more...

1 Rocca surprised me a bit by turning into a mystery.  I haven't finished watching it yet. (SO much overtime lately). My guess is that since that priestess had the damned key to the temple, she's the guilty party. But they forgot all about that.

God Eater looked pretty, but I couldn't get into it. I wrote a post about that (I AM still blogging, just nobody comments it seems).

Charlotte I also couldn't get into simply because the MC was such a dick, the president was so pushy, and the speed guy was so... dumb.

But Classroom Crisis has been interesting so far. Thanks for pointing it out. Again, I haven't finished, but I'm guessing that making A-Tec succeed through adversity is actually part of the takeover plot. Or I could be totally shooting in the dark.

2 Crud, I could have sworn I put the slash in the unspoiler tag.

3 So, I finished Rokka. Not really satisfied with that last episode. Nor the reveal. There's something about mysteries where you should be able to put the clues together as you go through them, rather than have something appear at the end that invalidates everything you thought you knew.  It's not playing fair with the audience.

And I especially don't like the new character thrown in at the end, just in time to make for stupid jealousy games with Flamie. Plus I hate her character design.

4 Yeah, sounds like you and I have the same reason to Rokka.

1 Oh?  I haven't been looking at this, or Charlotte.  Can you say anything in more detail?

2 Gave each a three episode try.  I decided to keep going with CC.

3
I think both are worth watching all the way through.  Charlotte definately went in a direction I was not expecting and I really liked it as a esper teen series.

Classroom Crisis was a little more average in its storytelling but it worked. One of the things I really liked was when someone (I don't know if it was Wonderduck or another blogger) said that they did it without having to have a ton of fanservice.  Don't get me wrong, the art is great but it lacks the overexaggerated almost hyper sexualization of many series.

Anime mysic Right now, I think Charlotte's opening theme is the best music of the season.

Quick thoughts on new shows. Charlotte has my eye, but im not sure what kind of series im in for.
Rokka looks to be an interesting fantasy story.

Not much else on my radar at this time.

Punch Line was interesting at first but it fell apart in a few episodes.  Ending was mediocre at best.

Evening... Laying in the dark with my old tuxedo cat under one hand and a book in the other. The thunder interrupts occasionally from a near by storm front. It is a good evening. 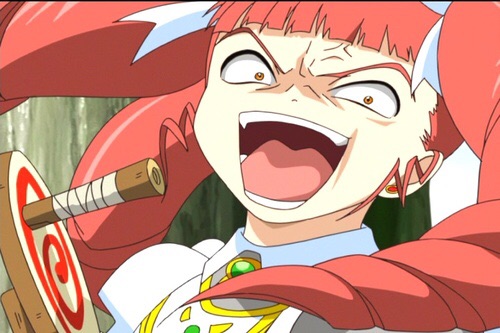 One should not read all of Uzumaki in one sitting....

(No really, this is not a joke.  That series is up there with the Centipede movies.)
more...

1 There were Centipede movies? Uzumaki was REALLY creepy I cannot imagine a movie based on Midway's Centipede could hold a candle to that.

Lots of watching on Crunchyroll lately. Started to continue Majestic Prince, but then saw an ad for Akame fans Kill.  I've discovered that I've been liking it so far.  Nifty story of a warrior who falls in with an assassination unit of a revolutionary army.

More notes in a bit, but the first three have been fun to watch.
more...

Music rediscovered... Okay, some time back, I stumbled on a torrent for Deus Ex Sonic Augmentation from OCRemix.  I just learned today that they have released multiple albums of songs over the years.  Went on a downloading spree.

The music!!! Oh the cycling music!!

I love it when an anime series makes me smile... Thanks to Steven Den Beste, I learned of the Bodacious Space Pirates movie, Abyss of Hyperspace, being released.
more...

Bicycling... Started cycling this last week again.  Realized that 312 lbs was just the wrong way to be living.  I've known this for some time, and have hovered around the 290 mark for the last couple of years, but it jumped up twenty pounds in the last eight months.  Nope, I'm done.  I promised myself years ago it wouldn't get this bad and I turned around and let it get that bad.  I had a couple of rides where I couldn't even make it a mile, but as I ride every day, I'm pushing it just a little further.  Managed to put in a five mile ride in this afternoon with a small mid ride break.  Hoping to be doing twenty to thirty by midsummer.

Benefits:  I'm already sleeping better a night on any day I exercise and I've found my troubleshooting has been going better at the helpdesk I work at.

Diet of course makes a difference. reducing carbs works best for me.

I have one friend who got a standing desk, and set up a treadmill in front of it.

2 Trying to talk my work into letting me raise my desk so I can stand.  The downside is that I'm in a call center... and I'm not a quiet person.  My voice projects without much trying on my part.

Diet is next on my list once exercise becomes the norm again.  I still eat like I'm eighteen.  I know this is bad, but I still can't seem to overcome it.

Happy New Year! For the few that read here, Happy New Year to you all! May your health be good and your projects be plentiful and completed on time!

Whee... prepping for NaNoWriMo... I'm actually getting some outlining done in advance of National Novel Writing Month for once.  I might actually finish this year.

I only did a 3000 word first chapter for the novelization of my Baen Fantasy Contest entry.  But then, I wasn't doing NANO.

2 I failed completely.  Got sidetracked by a levelling event in Star Wars The Old Republic.

The Argent Adept strums his way to victory over Baron Blade Muahahaha! First game ever with Argent Adept. Four heroes (Legacy, Argent Adept, Tempest, Bunker) vs Baron Blade. The Baron falls. It was not pretty. All three hasten doom cards at the top of the Baron's deck made lots of early damage. Argent Adept kept triggering Tempest's healing downpour... and then Tempest triggered it too. It was the only thing that kept me in the game. Finishing shot by Bunker and his Omni-cannon, charged to five.

Yes, I like Sentinels of the Multiverse. One of my favorite co-operative play games.

An early stormy morning I've got my work stuff up and running, the rain is falling outside with some thunder in the background.  I count this a good morning.  Still not adjusted to my shift schedule completely.  Need to figure out how to enjoy the weekend without staying up late and sleeping in til noon.  I'm still happy I was able to change shifts at work.  I like being off work by 1pm.

Chaika - The Coffin Princess Still in the middle of watching episode one, but I think I'm gonna like this one for the same reason I liked Scrapped Princess.  Interesting world and characters, and decent animation.  Doesn't look bad at all,

A post on another blog... But mine anyway.. http://nerdstable.blogspot.com/2014/08/first-thoughts-pathfinder-adventure.html?spref=fb
Posted a first look review of the newest Pathfinder Adventure Card Game. The first set, Rise of the Runelords has been a great game that my wife and i have enjoyed playing through.  Now we get to be pirates!
(Sorry the link isnt a link right now.  Tablet posting right now.)